From pale yellow to darkest brown (almost tending to black!), beer’s palette has these and everything in between too. Beer colour also tells a few things about itself – what products went into its making, the processes it has undergone, etc. But when it comes to guessing the taste, flavour, its strength or the ABV, the colour can trick us.

Just like – while you may think a dark brown beer, like the Guinness(which is called a stout), would be very strong, it actually has only about 4.2% ABV and gives a rich creamy feel in the mouth.

Did you know there are special colour charts for beer?

The beer industry has the following two ways to describe and designate beer colours:

Where does the beer get its colour from?

Beer gets its colour in a whole range of different ways. While ingredients certainly contribute to it, the various processes along the course of brewing determines the intensity. Let’s look at each of these in detail.

Grains are the main contributing factor to the beer colour. This shouldn’t be too surprising given that they form the base of the beer itself. The pigments in the grains give beer a rusty red colour.

The steps of grain roasting, malting, drying, etc., change this further. Here, they undergo two chemical reactions (Maillards and Caramelization) which make grains go from pale yellow to jet black depending on the temperature and the duration they were exposed to in the process.

Since about 90-95% of beer is water, the pH level of water used in mashing and boiling can influence the colour too. A lower pH level (i.e. more acidic) gives a paler looking beer.

The chemical compounds extracted from the hops – the polyphenols and acids can create a haze that makes the beer look lighter than it actually is. So more the hops used or added later (such as dry hopping), the lighter shade it feels.

Some yeast strains settle down faster while others remain suspended. Floating yeast causes some turbidity which in turn makes the beer colour we perceive, paler.

Adding supplements such as rice, corn, or white sugar to the brewing process resulting in a lighter color.

This is rather obvious but still has to be added to the list to make it complete!
Added extracts for sour beers or fruity flavours change the colour of the beer, usually making them brighter and interesting.

The processes or Brewing conditions:

Unmalted or lightly malted and dried grains make a beer yellow, transparent, and sparkling, whereas roasted malts make dark beers.
So experimenting with the malting (temperature and time) or mixing a certain ratio of heavy and light malted grains can make beers of any shade. Sounds exciting to be the brewmaster with the magical potions and secret recipes.

The flavors of bread or toasty, chocolate and coffee too can all be attributed to the malts.

Oxidation during and after the active brewing process generally brings on a yellow-brown tinge to the beer.

Time is an underdog here as its results are not swift and glaring. In every brewing step, the duration of the process plays a major role in bringing out flavours and influences colour too.

We have already learnt the effect of malting.

Coming to other things, Mash colour deepens with the amount of contact time with the grains.

And the Beer’s natural aging process particles settle down making it appear darker than before.

So what exactly are these beer colours? How do we describe them?

Here is the detailed colour chart with the corresponding SRM valves and beer styles that match the colours. 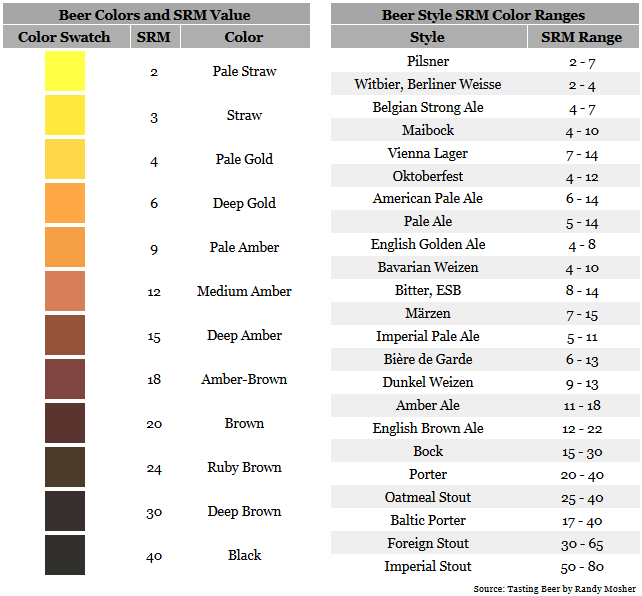 Knowing about the factors (processes and the ingredients) that determine the beer colour, you can play around with them to achieve the shade you like to see for your beer!

You can also create a great first impression for your friends and customers as well. Happy Brewing!